Has this ever happened to you? You come up with an amazing idea for a story. Let’s say it’s 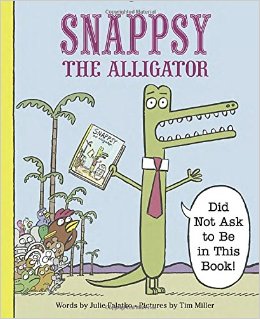 about a boy who wants a dog, and all the things he does to convince his parents to get him a dog. You work on it, revise it, make it better. You’re feeling pretty good about Ben and the Dog Campaign. And then you’re standing in a bookstore and, under a cloud of dread, you pick up Bob Lobbies for a Dog. It’s essentially the same as your story.

Or maybe you don’t even get that far. Maybe you write Ben and the Dog Campaign and even though you love it, there’s a funny feeling in your stomach when you read it. A feeling that says, “This is kind of flat.”  A feeling that says: “So what?”

And let me tell you this: you never want to think, “So what?” after reading a story.

You, my friend, need an exploding sandwich.

Don’t hide behind that bush! It’s a metaphorical exploding sandwich. All I mean is that you need a surprise, and not a something-jumps-out surprise so much as an aliens-fly-down-and-luckily-make-amazing-tuna-salad surprise. Something that says “that is great” instead of “so what?”

So many picture books can be grouped into the same category. Pet-wanting books, difficult-bedtime books, first-day-of-school books, moving-to-a-new-house books. There’s a reason for all those books. Kids do want pets. They don’t want to go to bed.

You can absolutely write a book in one of these categories, but you want yours to stand out. You don’t want an agent or editor to read the pitch for your book and unsuccessfully suppress a yawn. Which would you read first?

Ben wants a dog, but his mom says no way. Ben shows her he’s responsible by putting out food twice a day, walking himself around the block, and brushing the couch. All his hard work pays off, and in the end his parents take him to the shelter to pick out his new best friend! Kids will learn the value of hard work. For fans of literally every boring pet picture book ever.

Ben wants a dog, but his mom says no way. So Ben builds a Rube Goldberg device to free all the dogs from the pound and lure them to his backyard. Surely his mom won’t be able to resist all those cute furry faces? But when things go horribly awry, Ben is left with a surprising new best friend: an octopus. For fans of Billy Twitters and His Blue Whale Problem, Sophie’s Squash, Cecil the Pet Glacier, and Sparky.

You might ask: how? I’ve found the best way to do this, and also add a lot of humor to your story, is to start mashing things up.

Do you have two stories that aren’t quite working? Smush them together. Maybe you have a bedtime story that’s kind of dull, and a story about a loud robot that you can’t find an ending for. Mash those two together. I know they have nothing in common, except always remember that they have you in common, which is not a small thing. So you make a story where bedtime doesn’t go well because that robot is just so loud. That’ll stand out much more on the shelf, and it’ll be funnier too.

I had the hardest time with revisions on my picture book The Society of Underrepresented Animals. My editor and I had been working to make it better, but it still had a small nagging “so what?” feeling. In desperation, I wrote five different versions of the story with very different plots. None of those was quite right either, though. So I smushed the best parts of them together, and that’s what finally worked.

You don’t even have to do it with the whole story, you can just throw in a few small exploding sandwiches. Make a park bench wearing sneakers deliver sage advice. Have one boy carry a tuba around everywhere. Change a character into a kitten who dreams of running her own popsicle truck franchise. The key is to be silly, surprising, and memorable. And the real trick is to make it work for your book. I bet, though, that once you tell your brain you want an exploding sandwich, suddenly you’ll see how that makes the story come together. That boy with the tuba? He uses it to call to the elephant who runs to the tree and saves Popsicle Kitten, who got stuck up there dreaming of new flavors for her Catsicle fleet. Or whatever. Your brain likes fun. Your brain likes surprises. Your brain will be delighted by the challenge and will have fun connecting the dots.

And so will readers.

Julie Falatko debut picture book is Snappsy the Alligator (Did Not Ask to Be in This Book), illustrated by Tim Miller (Viking). She is also the author of The Society of Underrepresented Animals, illustrated by Charles Santoso (Viking, 2018), and Help Wanted: One Rooster(Viking, 2019).

If you are registered for Kidlit Summer School, you can download a worksheet of Julie’s writing exercise at our Exercise Book. This is a password-protected area — only members allowed! Please check your email for the password.

If you haven’t registered for #KidlitSummerSchool yet click HERE.

Julie is generously giving away a signed copy of SNAPPSY. For a chance to win, please leave a comment below.

Don’t miss your chance to get perfect attendance! Leave a comment on this post within the first 24 hours. Moderators have to approve first-time commenters, so your comment may not show up immediately.

Grab our badge designed by the amazing Bonnie Adamson!

Grab our badge and link to http:/www.nerdychickswrite.com 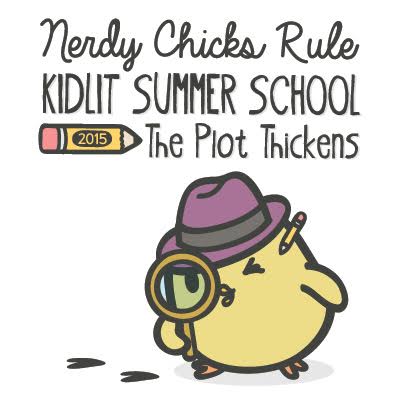 Copy badge and link to https://nerdychickswrite.com

Our 2014 Badge designed by the amazing Zach OHora!

Copy badge and link to https://nerdychickswrite.wordpress.com/